Oh boy. Those wonderful Whirlwinds of Woburn & Wavendon. A bit feisty today, but lots of good quality from the team in claret and blue. The boys really used their recent passing practice well, with plenty of killer passes. After the game, the team presented sponsor Deep Blue with a framed shirt and team picture, tucking into sausage and chips and making a great big muddy mess of their shiny floor! So today’s match report is for the team and for our sponsors too.

*Agastya – a tidy 1-2 on the left with Jack from a goal-kick. Didn’t ‘fritter‘ away possession once.
*Alexander – a smacked shot that came back from the crossbar. Think he ‘chipped‘ it.
*Finley – arrived in the box to shoot high into the net after a Lewis run. He ‘plaiced‘ it accurately.
*Jack – a free-kick long pass to Lewis in Q3. It ‘sliced‘ the defence in two. My ‘cod‘ it was good.
*Jake – a tackle, dribble past one player on the left and forward pass onto Noah. Kept his eyes ‘peeled‘.
*Lewis – dribbled through a pack of three defenders…and then the keeper… before having a shot saved on the line. Truly ‘s-mash-ing‘. Also, kept his cool when he was ‘as-salt-ed’.
*Noah – took a pass from Lewis before running quickly into the box to shoot. The Tigers defence couldn’t ‘ketch-up‘. 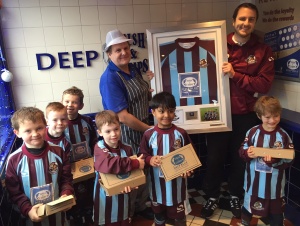