We were away against Biggleswade this morning and it proved to be a deceptively chillier morning than anticipated which made the coffee on sale all that more appreciated !

We had agreed on reducing the numbers of players if the score difference became too great but from the start it became apparent that the home side were up for a match and were determined to keep it as close a game as they could. Thanks to Gary for stepping in to referee in the absence of either an FA appointed ref or one supplied by the home team.

The Lionesses though dominant from the start were unable to find the net which was effectively defended by both Biggleswade and their super new goalie. There was some good passing play between Olivia and Charlotte in midfield and the back line of Tayla, the Kinns and Scoobs ensured that any balls that strayed beyond the half way line were thwarted and quickly turned back towards the Biggleswade goal. Maggie however, despite displaying some fantastic mud rolls in the warm-up, by this point in the first half, was barely put to the test. 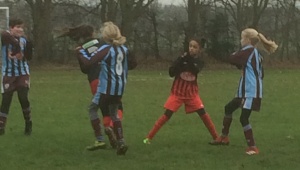 A new dance craze….all we need is a ball !

It wasn’t long before a tremendous kick out from Maggie set the ball up nicely for Kitty who secured it into the net, notching the first goal on the scoresheet. Play continued in much of the same vein for the first half; the Lionesses remained in control but despite a number of shots on goal were unable to score. Towards the end of the second quarter, Jas got on the end of a long ball from Mollie and managed to get it past the Biggleswade goalie who just got a hand to her first attempt. 2-0 to Woburn at the half-time whistle.

Woburn on the attack 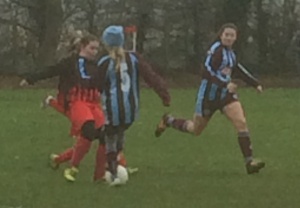 The pitch had turned into a bit of a mud bath which made it a little harder for both teams to control the ball but after a short half time break play resumed and Biggleswade came out with the wind behind their sails. Woburn sometimes are a little guilty of taking their foot off the accelerator once a couple of goals ahead. Maggie was put under a bit more pressure and the home side narrowly missed a couple of shots. Woburn soon got the ball back into their scoring half and Izzy got onto the end of a rebound from the Biggleswade goalie and saw off a defender to score the third goal for Woburn. Shortly after, Jas launched a high shot on target but again the opposition goalie had it covered. 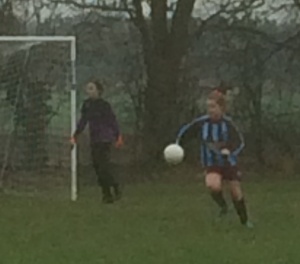 Jas on the attack 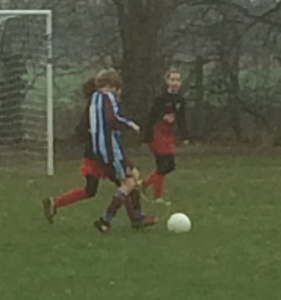 Olivia in for the tackle

Scoobs too came close on a number of occasions and it will only be a matter of time I’m sure before she finds the net! It was a win for Woburn and although the result perhaps wasn’t in doubt, it was an enjoyable match to watch. It may have been Biggleswade’s best result this season so congratulations to them …. I think !

Scoobs was voted GOM by the opposition and for our coaches today it was an easier decision than last week. The player we chose has raised her game over the last few weeks. Her kicking power and accuracy has noticeably improved and she is quick to get to the ball. So GOM for Woburn is Katie, well done keep it up.

No dodgy stats today as I was running the line but running totals below.