We arrived at Flitwick’s pristine ground on a mild overcast morning, which promised rain but thankfully none came, or very little. (That was saving itself for the Christmas ‘do’ later!)

The game commenced & Flitwick were up for it from the start keeping our girls, who were a little on the sleepy side, pinned in our half for much of the game.  Flitwick scored early 1-0. Kitty did manage to get one back in the first half after Flitwick gave her chances by passing the ball out to her on 3 occasions with Kitty managing to get the last one in. They learnt from that mistake – but unfortunately we didn’t.

We did pass out from the back but rather predictably, and on numerous occasions the ball found one of their players which Flitwick were able to capitalise on, keeping us on the back foot. 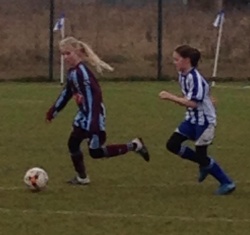 On our few forays into the Flitwick half, an enormous gap opened up between our defence & midfield/attack and if we lost possession, Flitwick gratefully took advantage of the space, running at our defence.

Kitty took some excellent corners and Tayla stepped up to take a free kick awarded to us in the second half. Though she hit it ferociously hard, the head of Flitwick’s athletic no 9 kept it clear of the goal. 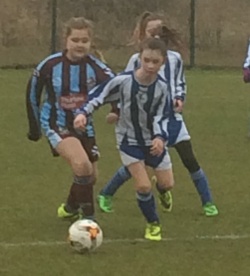 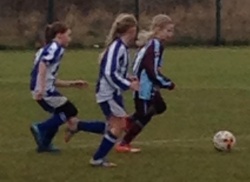 The game finished 5-1 but admirably I don’t think our girls’ heads dropped at all; they kept up until the end. I think our girls struggled a bit with the speed of the pitch (less like a undulating pasture). Ultimately we were undone by a very good Flitwick team, who, in my view, are the team of the season. They have a great work ethic, keep the ball down and put in hard but fair tackles. Well done Flitwick.

Scoobs, Izzy and Mollie ran their legs off but the parents voted Charlotte, who has steadily improved, Girl of the Match this week and I think she enjoyed her time up front. Well done.

Thanks also to Liz, Charlotte’s mum, for some great photos this week. The previous photographer has been given the sack due to a below standard performance.