Following last week’s stunning victory against Newport Pagnell, the Woburn & Wavendon Hurricanes wagons rolled into the picturesque (and remote) village of Turvey for the final match of this long league season. Harrold & Carlton were sitting comfortably in 3rd position in the table, whilst Woburn were destined to finish 3rd bottom whatever the scoreline today. However, the Hurricanes had upset the form book before Christmas with a 4-1 win against H&C, so no doubt the home team would be looking for that dish best served cold.

Leon and Andy had a diminished team to choose from. Following Orlando‘s departure in April, Theo had also decided to take a break from football, we all wish him well and hope to see both him and his Dad Steve on the touchline again soon. Not only that but also two of the three goalkeeping options were injured! Luke‘s joy at beating Newport Pagnell had been tempered by the fracture to his arm (although it didn’t stop him cheering on the team), and Evan had sprained his wrist so Francis stood in between the sticks. Sadly 3 minutes in and his first action was picking the ball out of the net as a corner wasn’t cleared, and slotted in by H&C. 1-0. The end of season feel was very much in evidence, although Woburn perked up as Harry had a shot well saved and Freddie‘s corner needed to be held. However, the game was gone in 60 seconds as another Carlton corner was deflected in for 2-0, then straight from the kick-off the H&C no. 8 won the ball and strolled through weary Woburn to slot home for 3-0. The Lions did pull one back as Kamaal‘s corner saw Freddie’s looping header beat everyone in the box. 3-1, a possible lifeline before half-time.

Harrold & Carlton looked to extend their lead after the break but Francis appeared to morph into a curious hybrid of Gandalf and Manuel Neuer. He might as well have shouted ‘YOU SHALL NOT PASS’ as he smashed the ball clear of the goal several times (once an unwitting H&C player was poleaxed as the loose ball hit him). Despite this inspired display, the pacy no. 8 ran onto a through ball to make it 4-1 before Asante reduced the deficit with a shot/cross that caught a gust of wind. He meant it, of course. 4-2. Woburn pushed up looking for more, but an uncharacteristic error from the stand-in keeper saw both Harrold & Carlton pounce on a loose ball to wrap up the game. 5-2. The Hurricanes did have the ball in the net again, but the referee ruled that it had been handled, so the final whistle blew with no more goals. Well done to Harrold & Carlton for exacting their revenge, but similarly credit to Woburn & Wavendon for their play both today and throughout the long season.

Next up, tournament time, but we’re never very good in tournaments, are we???

Saturday 17th May Hatters U9 Cup, Kenilworth Road, Luton. All three of our Under 9 Teams combined for a day out at the Hatters Cup in Luton. A special 100 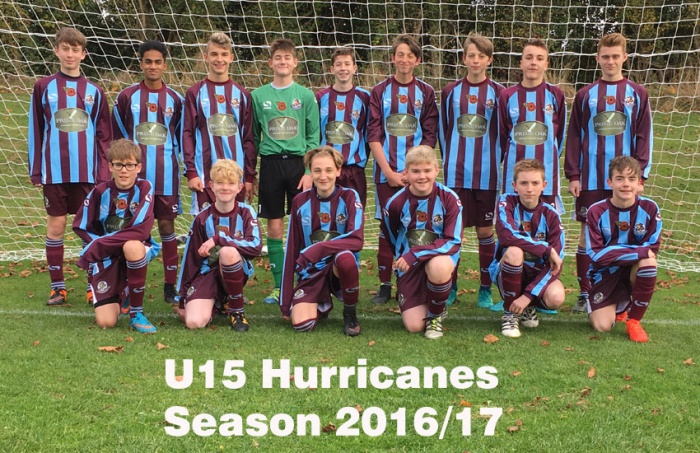