This was it! Our unbeaten record! Our double treble! Our pride! Everything we had worked for so far, all on the line, on this boiling hot day!

Kempston were always going to be dangerous, they had nothing to loose this may have been there last ever u18 game  (in the nicest kind of way) and so it was to prove They had done there homework and they changed their tactics to pushing us and pressing us! Catching us frustratingly offside. Giving us no room or space. 11 Kempston players were ready to give their all one last time against us. They did, all credit to them for having 11v11.

Coach Pat was stuck in Portugal working with no way home! (Upset & frustrated are words that came to mind.) But hey! Coach Steve, Ross & Joe had been in this position before & knew they could handle things.

The squad looked strong with 14 options available, with the hot weather all the players would be needed.

Kempston charged forward wave after wave in the first 15 mins and nearly broke through our mighty back four of Chloe A, Millie, Micky & Grace, who had been our rock all season! Alice started in front of the back four and worked hard.

Next Emily gets a ball right in the face and is off with a nose bleed! You could not write it!!!

Hard work at both ends and the half ends at only 0-1. They look the happier of the teams, their  homework was working! As their back line kept pushing up and catching us offside!!

Lucky break early in the second half gets Casey a nice goal slotting it passed the on rushing keeper. 0-2

Another set piece a free kick gets Millie her second at the back post with a nudge in! They all count! Still,only 6 mins into the 2nd half. 0-3

Another corner and now we are looking dangerous at every set piece! Marvellous Millie gets her well deserved hatrick 0-4. Game over?Madison’s turn to drive forward from the wing and a long run down the right ends in a goal right in the corner. 0-5

Charlie now comes on pitch and takes a great pass after some great interplay from Alice, Chloe A & Grace to set up a shot from the edge of the box, giving a well earned rest for Georgie upfront who worked tirelessly trying to hold the ball up. 0-6 All the players are desperate to keep hydrated as temperatures rise, thankfully we had 14 players, and they all played a major part in this very successful day, month, season!!

GREAT DAY, GREAT SEASON, GREAT MEMORIES, GREAT SUPPORT, GREAT TEAM!    End of a Chapter ! New one has begun!! ‘Once a Lionesses always a Lionesses at heart.’ 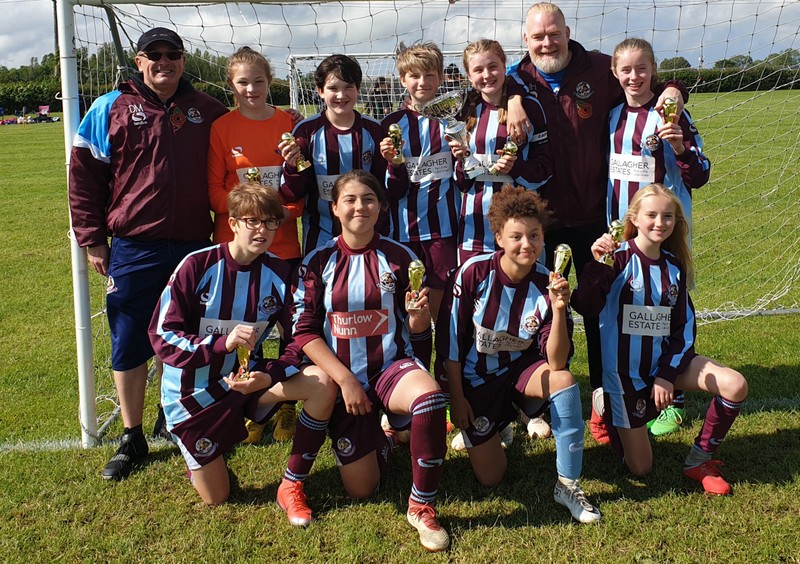