It was a much milder morning at Crawley Road today with even the sun managing to push it’s way out from behind the cloud. Paul led a minute’s applause in respect for Aiden Selleck, the young Tattenhoe player who sadly passed away last weekend, and then the whistle blew and it was Woburn v Woburn.

We started with the usual formation but with Jasmine up front. Jasmine had a very good stint getting a few shots on target & placing herself well for our midfield, particularly in the first half when the flow of play was very much 50-50, with the teams pretty evenly matched throughout. 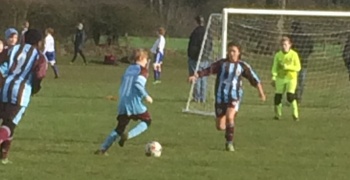 Olivia on the attack

Mollie and Scoobs made some great runs up the wings, taking the ball back in the right direction for us, but as a team we lacked the passing play we had so pleasingly demonstrated the week before. When there was interchange among the front three we looked good & there was a chance of getting a shot off, but we only partook in solo runs. Scoobs had a shot in the second half but Mollie shone particularly today and was hence voted Girl of the Match by the parents. 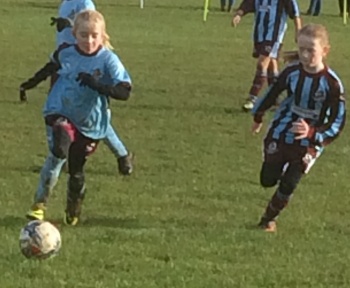 The match soon became a game of two halves for us. At the start of the second half the play was very much in front of our goal, with the team stretched out. Tayla did a sterling job of defending ball after ball but we soon conceded a goal to the Blues’ very formidable number 2. Some of our girls’ heads dropped a bit and they started to ball-watch rather than going in for tackles. Freya was under pressure and although she put in a lovely high save in the first half and noticeably dived more onto the balls to make them safe; the pressure was on, 2-0.

Inspite of a team change again for the final quarter, we had reverted to a long-ball game which stretched the team out and left vulnerable gaps. The Blues’ defenders were playing well and kept Kitty isolated and the long range shots didn’t threaten the Blues’ goalie who was very proficient. The game ended at 3-0 and, on this occasion, a well-deserved win for the Blues.