There was definitely a hint of Spring in the air this morning as we prepared to play Flitwick at our home ground.

We knew the game would be tough and I have to say it developed very early on into a match of blue and white against the Woburn defence; we had our backs against the wall.

The attack on our goal started from the whistle and I think caught our girls day dreaming a little. Izzy managed a great run down the left side and put in a lovely cross but unfortunately the strikers couldn’t take advantage and play quickly returned to the Woburn half.

Flitwick had a strong midfield who dominated the middle of the pitch and were able to take advantage of the gaps which opened up in ours, enabling them to launch attack after attack. (If you refer to my dodgy stats below you will see that Flitwick had 14 corners to our 3).

There was much less evidence of the passing play we have been working on perhaps because the girls were clearly under pressure. While looking through the photos it became apparent, particularly in midfield, how frequently Woburn were surrounded by Flitwick players.

Midfield struggled today with the game becoming stretched and any interplay being minimal – Flitwick were particularly strong there but also, on occasion, Woburn were too pedestrian – that is simply not something we can get away with. Skill and athleticism are important but, above all, determination is what is needed.

That said, there were some excellent performances from defence as a whole who kept us in the game and were under pressure throughout the entire match. Scoobs in particular was brilliant and, in my opinion, deserved the parents’ award of Girl of the Match. I know Tayla felt mistakes were made by defence but I think they can be forgiven due to the amount of pressure they were under. 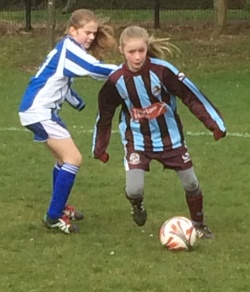 I would like to compliment Charlotte too on another very good performance. She went for it from the off, showed some good skill in taking on the opposition and great determination, not giving up in pursuit of the ball. Well done. 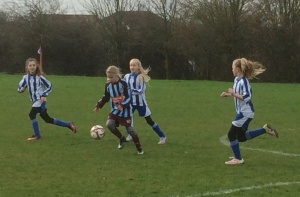 Charlotte determined in spite of being surrounded.

Jaz had a great game; always making herself available to receive the ball and holding onto it and redistributing intelligently. With three shots on target and the final one just alluding the keeper she took the game to 1-1 in the latter stages of the first half.

Jaz on the attack. 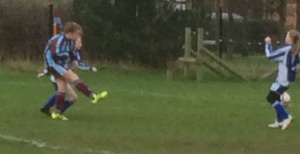 Not wanting to sound wholly negative, it is worth mentioning that Flitwick managed very few shots on target and in the second half we had a spell of possession which did put them under pressure. Our defence were so successful at keeping us in the game that, in spite of lacking in some areas, the score line could just have easily have gone either way. Towards the end though, play reverted back to our half and we all breathed somewhat of a sigh of relief when Gary finally decided to blow the whistle which he had held to his lips for what had felt like an eternity!