This sunny spring morning found us on Sandy’s enviably well-conditioned pitch as we lined up with Kitty up front, Olivia and Izzy in midfield and Ruby K, Tayla and Scoobs across the back, in front of Freya. As the whistle blew, or at least I think it blew, as it was somewhat muffled by some rather over-zealous campanologists who seemed determined to expel any lingering sleepy heads from their beds.

The Tigers from the outset were tapping the ball around nicely for about the first five or 10 minutes but the Lionesses soon got the bit between their teeth and settled comfortably into possession.

Olivia managed a couple of shots early on but the first goal came from Izzy who ran onto a ball from Olivia’s terrific corner and sent a belter into the net from outside the area.

Izzy about to score.

Scoobs was kept busy with throw-ins and it was noticeable today how Izzy and Olivia managed to manipulate the opposition into letting throw-ins run past them in order to allow themselves to then get onto the ball, to great effect. It was also good to see midfield making use of Mollie and Scoobs in back passes which served to maintain possession for Woburn and gave Scoobs and Mollie the chance to redistribute or put the ball into a dangerous position. Izzy showed a lovely bit of skill at one point with a nutmeg through no. 5’s legs and then a one-two with Kitty in the same movement.

Ruby K was again looking increasingly confident today and placed some well-thought, strong and accurate passes to her team mates. Keep it up Ruby.

Kitty had a couple of shots just off-target before getting on to the end of a long-range pass from Tayla and resoundingly finding the back of the net, taking Woburn to 0-2 just before the second quarter. 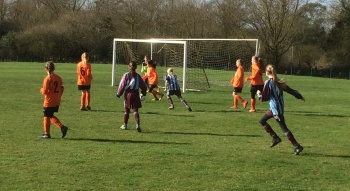 Charlotte, Scoobs and Katie closing in.

Charlotte and Katie came on for Kitty and Olivia in the second quarter and both ran their legs off; Charlotte showing some great determination in winning the ball and running it convincingly up the left wing while Katie kept the Tigers’ midfield defence on their toes. Both demonstrated the confidence to have a go at goal today and put in strong performances, well done. 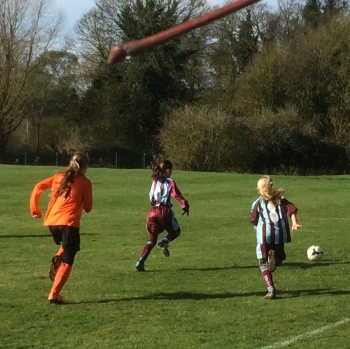 Charlotte and Katie in flight.

The third goal came from Tayla, as the result of a corner won by Katie and taken by Scoobs and once Tayla’s foot had made contact, there was no doubt where it was going to end up: 0-3.

Any breaks that Mid Beds made for goal were comfortably thwarted by our defence with Tayla reliably picking up any strays and redistributing them. Izzy managed to stop a boot with her face at one point but luckily nurse Scoobs was on hand to give her that all-important hug and Izzy dusted herself down and carried on.

By the time the oranges came out at half-time our girls were looking in control but not overly confident as the Tigers have often come out stronger in the second half, which indeed they did again.

From the off, they started causing problems and our defence had their work cut out. The Tigers’ number 5 played a great game and kept Scoobs and Mollie busy but they managed to successfully shepherd her out to the sides, making it harder for the Tigers to connect. Mid Beds’ shot on target came from number 5 which Freya, who had had relatively little to do up until this point, reliably put a stop to. At this point we were starting to look a little bit leggy with slightly less determination to get to the ball.

Distribution from goal became a little slack and the Tiger’s took full advantage, running hard at Tayla to close down the ball but to our girls’ credit, they learnt quickly and, from then on, distribution was sharp. Mollie continued to receive balls back from midfield and feed them forward with momentum starting to shift in Woburn’s favour again and a return to passing play. Kitty had another couple of shots just wide and over goal. We were awarded a free kick in the latter part of the second half which Kitty struck beautifully but the goalie positioned herself well to save it. The Tigers battled on but our girls maintained the upper hand.

In the closing few minutes Olivia took a very well-taken corner which unfortunately for the Tigers’ goalie slipped out of her hands into her own net; Olivia claimed the goal, 0-4.

The Tigers perhaps weren’t firing on all cylinders today but equally our girls played an impressive game. It was a really strong team performance from all the girls with some thoughtful passing and concentration on keeping possession which again made it harder for the opposition to break the flow of play. The good performances all round made it hard for the parents to choose Girl of the Match today but, in my opinion, they got it right with Tayla taking the title and getting herself on the score sheet too. 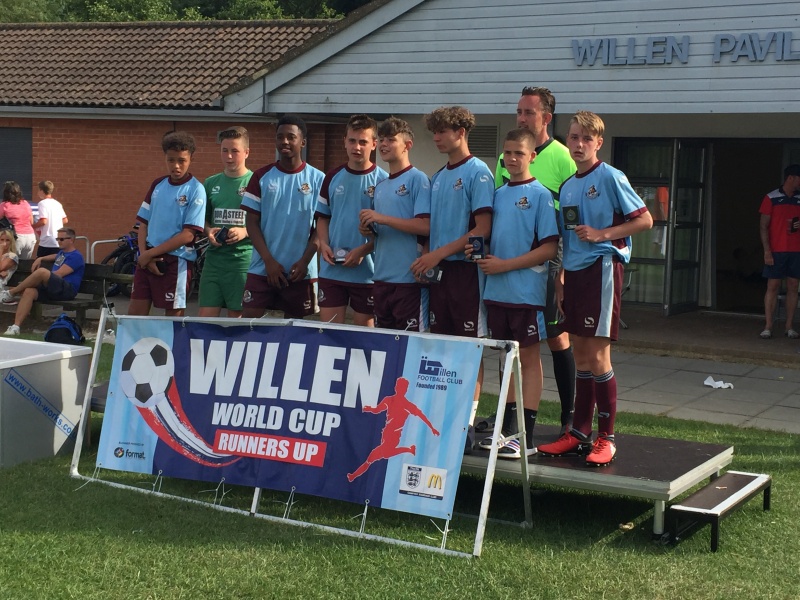