This very grey, soggy, Saturday saw us convene at Sandye Place Academy for our next league fixture against Mid Beds Tigers.  Wafts of coffee and bacon from the Tigers’ refreshment kiosk served to raise spirits even if it failed to lift the low hanging cloud.

WWFC noted with envy the rather eye-catching shelter which the Tigers had at the side of the pitch to provide cover against the elements, until, that was, a gentle gust of wind caught it later in the match and sent it flipping over backwards onto the neighbouring pitch.

Before the match, both teams assembled for a moment’s reflective applause in tribute to young Zach Heath who, as most of you know, passed away earlier this week.

At the outset the teams looked pretty evenly matched but within a few minutes Charlotte gave the Lionesses a boost by netting her second goal of the season, to the left of the Tigers’ goalie. From then on, the Lionesses largely took control demonstrating some lovely passing from midfield up to the forwards. A slight lack in concentration led to a break by the Tigers though which caught the defence napping and the oranges slipped one into the net. One all.

Kitty continued on her scoring run with another impressive hat trick today, showing good movement, determination and great sportsmanship by passing the ball straight to the Tigers’ goalie after the Lionesses were awarded a penalty, resulting from a misunderstanding by a Tigers’ player. This was appreciated by the opposition who made note of it on the FA website.

Kitty about to shoot

Olivia and Izzy demonstrated some lovely passing in midfield, laying claim to the ball and redirecting the play. On many occasion Izzy brought the ball to heel and placed a succession of lovely through-passes for the forwards to run onto. Olivia skilfully tackled the ball away from the Tigers and maintained possession before redistributing to attack. She had four assists including a corner which tantalizingly rolled along the line before being sealed as a done-deal by Jas (which I know Olivia is going to bend my ear about!).

Scoobs on the run 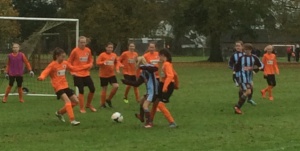 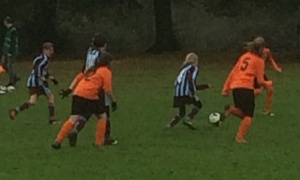 Tayla fired the ball towards goal; it hit the post, ricocheted into the goalie, and bounced straight into the goal, giving Tayla her first net of the season… and perhaps a flicker of a smile?

Jas too placed a beautifully curving shot to the left of the goalie’s head later in the game but, at just a fraction too high, it sailed over the bar. 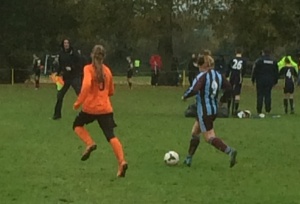 Jas on the attack

Though not quite managing to find the net today, Scoobs ran her legs off down the right wing, tirelessly pushing up and then sprinting back to take on the Tigers’ number 5. Great to see Scoobs in top gear and showing she can match any opponent for speed.

Ruby K showed good determination today, going in for the tackle and placing some great accurate passes up the pitch.  Mollie had us all worried by hobbling onto the pitch, sporting a knee bandage and insisting she was fine to play. While she put in a very admirable effort, 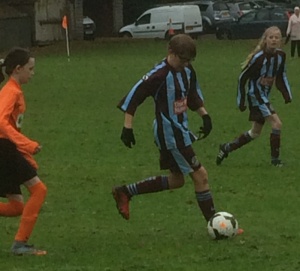 the spectators breathed a combined sigh of relief when she was substituted to enable her to rest her leg ….we need you firing on all cylinders again next week Mollie!

Maggie was suffering the chilling effects of having little to do on a very wet day but after the initial Tigers’ goal she soon got her eye in and swiftly ran confidently off her line to make any future attempts on goal safe.

The Tiger’s number 5 successfully thwarted many runs towards goal, running down and intercepting any player who lingered a moment too long on the ball but as the match progressed and her sheer coverage of the pitch started to impact upon her elegant athleticism, the Lionesses took full advantage with a succession of drives for goal. As the score line elevated I suggested that the Tigers may wish to take advantage of the new FA guidance and increase their team by one which they did, during the early part of the second half. It was remiss of me not to have taken one of our girls off later during the second half as the goal difference reached five, for which I later apologised; we are still getting to grips with the new rules.

Charlotte was a contender for today’s GOM after bringing her tally to two in this game but the unanimous choice among the coaches was Katie for her flexibility (playing both wings), tenaciousness and her growing confidence. You upped your game today Katie, well done.

It was good to see a variety of the girls getting on the score sheet today and hopefully this will give them a boost of confidence for the rest of the season. Please note, although I am keeping a record of running totals with regards goals and assists, I am very aware that such tallies will be less achievable for defence and Maggie. We will look at other ways of recording the progress of these players who are of equal value to the squad’s performance.