This overcast and I was going to say mild (though have been informed otherwise by the supporters!) Saturday, took us to Stotfold.

The referee was a quirky likable individual who was great with the girls & kept the linesmen on their toes. There was a slight misunderstanding between our coaches & the ref with regard to illegal throw-ins but it was soon sorted out and neither side suffered.

Stotfold proved to be a terrific team with the emphasis on the ‘team’.  Their back line was barely tested as my dodgy stats indicate.

Generally, I have to say, the girls were not at their best today; but such is sport. The two exceptions to this were Maggie & Tayla, both of whom prevented the score line against us from being much higher. 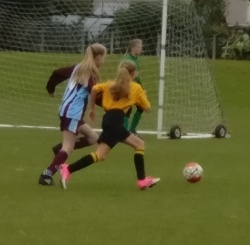 None of the girls seemed to have the determination to win their individual battles sufficiently today, which was required,  given the strong performance by Stotfold. When space did occasionally open up for us to run into, we failed to take advantage of it, with too many aimless kicks and not enough movement.  The gaps which opened up in our game at one point last season, seem to have returned at the expense of passing play. 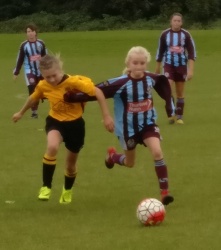 Stotfold really had the upper hand from the off and it was very much a case of backs against the wall for Woburn with Maggie and our defensive line tested to the limit. As a result we lost our cool which resulted in some cross-goal kicking (very important we refrain from this in future please!) and aimless punts up the pitch. Too many balls were given away to corners rather than kicking it out to the side. Mid field were too stretched out, not winning their battles and just didn’t perform as a unit today (like we know they can). Due to low numbers, some of the girls had to play out of position too which I believe also contributed to a lack of cohesive play.

What I do think is good, is that we didn’t drop our heads and indeed rallied again in the closing stages with some pressure over on the left wing. We knew having no subs would be tough, we also know fitness does need to improve however, we are at the start of the season and the aim is that as the season progresses, fitness will too. If girls are prepared to work hard on this, there is no reason why we can’t regain some lost ground.

A well-deserved win to Stotfold 2-0.