It was a busy Saturday morning at Crawley Road today as we lined up to play our sister team, the Lionesses Blues. We had no Katie and Kitty and Dean were donning their shades in the Derbyshire Dales this weekend, so Gary boldly took up the reins.

The Clarets started the quicker out the blocks, with some lovely passing between the girls. It wasn’t long before any nerves were settled, and Izzy found the back of the net, ably assisted by Olivia. 1-0.

The Clarets continued to dominate play, with any attempts at attack by the Blues quickly being reversed and they were soon rewarded with a second  goal; this time Izzy passing it to Jas who coolly placed the ball out of the goalie’s reach; 2-0.

The Blues came more into the game in the latter stages of the first half, with runs down the left wing, but our defensive line held firm and thwarted any chances for the opposition to get close on goal.

Again, the second half started with the Clarets reasserting their control on the game and some effective teamwork resulted in goal 3 as Izzy passed on to Olivia who struck it home.

We had the Kinns, Scoobs and Tayla in front of Freya today, with Olivia putting in a short stint too. Ruby K should be congratulated on what I thought was her best game of the season. I don’t think she lost a tackle and I definitely saw a flash of the speed I know she is capable of; even managing to get a shot in too. Well done. 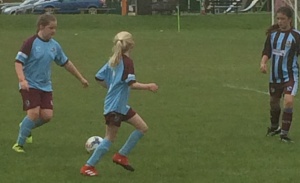 Jas looking to put Izzy through. 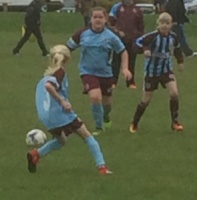 Izzy and Jas working together.

Mollie ran her legs off, also rarely losing a tackle and frequently winning the ball in difficult situations, then either running it on or passing it accurately up the field with some lovely interplay between her and Izzy. Tayla played an intelligent game today; always goal side of any threats to Freya and contained the Blues’ strong forward for much of the game, which the lack of opposition shots on goal testify to. 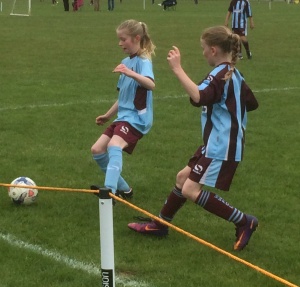 Mollie determined to defend the ball.

Scoobs, captain for today, performed to her usual high standards, athletically intercepting and reversing the run of play. Freya was a firm pair of hands, although not tested often, she wasn’t afraid to dive on the ball, with accurate kicks out, using all of the available back line which made it harder for the opposition to read.

We had Jaz up front with a short stint from Charlotte who also covered mid field with Izzy and Olivia. Charlotte, I really thought, was on for a goal today but it just wouldn’t quite fall right. Some great pressing play up front and in mid field, with confidence growing throughout the match. You had a great game Charlotte.

Jas too had a terrific game, always putting herself into positions to receive the ball, intelligently laying it off, particularly to Izzy & making time for herself to get shots off which were inevitably accurate. She clearly benefited with the extra pitch time she had today – bodes well for next season Jas. 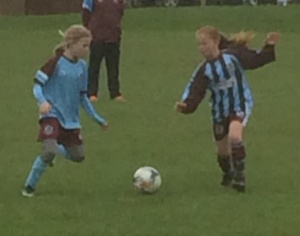 Izzy played a bit deeper but centrally today, linking well with many of the girls, notably Mollie, Jas & Olivia. She constantly terrorised the Blues’ defence with some jinking runs & or passes. (I’ve decided not to send her back to the shop). 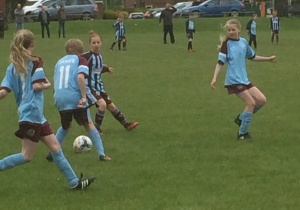 Olivia looking for the through pass.

Olivia was the complete player today, interlinking well, particularly with Izzy & Jas. She also stood in for Tayla for a stint in defence. I don’t believe I have ever seen Olivia run as much as she did today. She was awarded with a goal & with the parents’ award for ‘Girl of the Match’. Supporter of the Match – if there was one – might have to go to her mum!

It was an outstanding team performance today and great to see that passing play, that we know we can do, come back into the fore. Well done girls. 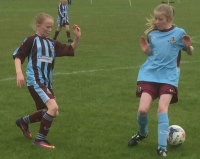 ..a spot of dad dancing… 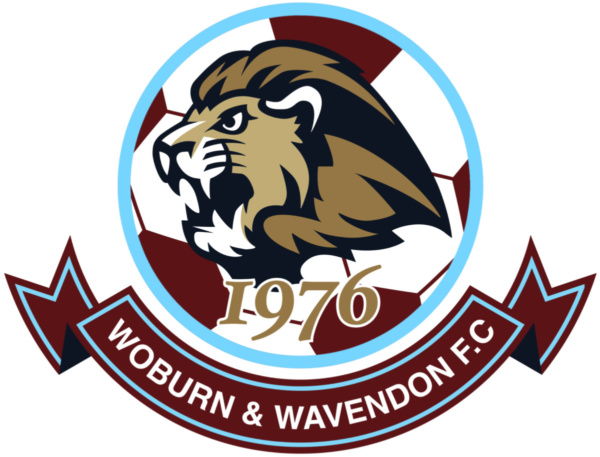