It was a bit of a cold, drizzly morning at Ridgmont today though at least we were on for a game after so many weather-forced cancellations. The rabbits had obviously been busy while we’d been away!

The game started well for Woburn with the Lionesses more up for a match than they have perhaps been of late. Captain for today, Ruby K, arrived sporting bandaged ribs and with relief Maggie resumed her spot between the goal posts following a midweek knock to the infamous knee. No Tayla this week so defence were a little rejigged.

We opened our scoring account early with a left wing pass from Olivia secured into the net by Jas 1-0.

Lovely interplay between Jas and Scoobs, which continued throughout the match, soon resulted in another goal for the home side with Jas laying the ball off to Scoobs who buried it top right hand corner. A brilliant goal. I know this because Scoobs reminded us all on several occasions that it was indeed a brilliant goal !  And it was.  2-0. 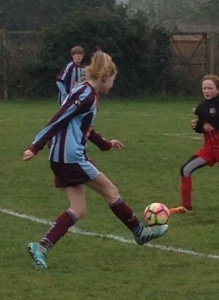 Is there glue on that ball … 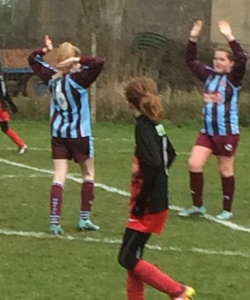 The Biggleswade goalie caught us off our guard with a long goal kick which bounced fortunately for Biggleswade, who took full advantage with a striding run, straight down the middle, 2-1. The defence learnt quickly from this and dropped back accordingly to deal with any future long kick outs. Unfortunately, the Biggleswade goalie went off injured not long after and one of her team-mates admirably stepped into her boots.

Kitty, who had already almost scored with a shot just over the bar near the start of the match, took a long range shot from an assist by Izzy, taking Woburn to 3-1. With play largely continuing in the Biggleswade half, Kitty was involved again this time taking a corner which Scoobs managed to convert, 4-1. 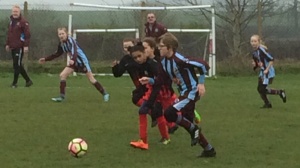 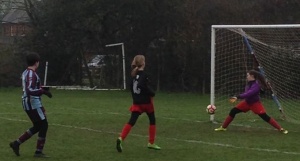 Kitty sneaking one in

Despite the goal difference, the visitors decided to let play continue with equal numbers at this point. A pass from Scoobs was again picked up by Jas who scored her second, 5-1. Then a quick thinking throw in by Izzy, down the left wing, went to Olivia who lobbed it over the goalie, securing another. Kitty went down not long after and was awarded a penalty which she converted off the top bar.  It was a half time high for the home side, coming off pitch at 7-1 but credit to the visitors who remained buoyant.

Biggleswade did put an extra player on after the break but declined the offer to take one of the Lionesses off when the deficit grew further as play continued in much the same vein.  Jas made it a hat-trick following another Scoobs – Jas combo; 8-1. At this point Dean very generously informed the girls that I would buy them an ice-cream if they scored with a header. Naturally, Olivia duly obliged (just my luck that I didn’t actually see it go in but needless to say, I have been persuaded). I would also like to extend the hand of generosity on behalf of Dean, whom I am sure would love to purchase another ice-cream for the next girl to score with a header from a corner). 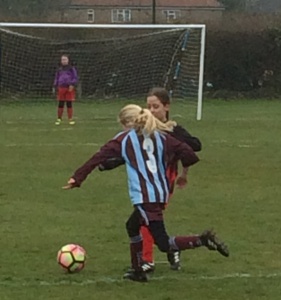 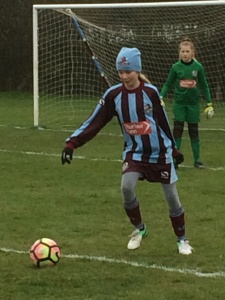 Kitty’s hat-trick came from a goal just outside the area, following an assist from Olivia, 10-1. Jas too was keen for another and, anticipating a goal kick well, put another in the back of the net. Biggleswade were still fighting and a determined run gave Maggie only her second real challenge of the game as she held off the attack, diving onto the ball to make it safe. In response Izzy, who had been threatening to score all morning, ran a solo effort from the half way line & slotted it into the Biggleswade goal, 12-1. A cross from Izzy again went straight to that girl Jas  who put it in the back of the net to secure her the highest scoring tally today and taking the final result to 13-1.

The new formation worked well today (Mike’s pretty new app illustrated it well!)  The defence with Mollie in the centre, Ruby at right back and Charlotte on the left performed really well, adapting to the abilities of the opposition goalies with regards to long kick outs. Well done girls. The revised midfield formation also proved very effective.

Girl of the match was a simple decision. Not only did she put goals away herself, she developed a lovely dynamic with a team mate, resulting in goals for both of them. She showed great determination today and one particular moment which sticks in my mind was when she realised another goal was on the cards and she sprinted hard against a defender to make the ball hers. Well done, today’s unanimous GOM is Jas.