An early 9.30am kick-off in Sandy this morning saw us arriving a little blurry-eyed but looking forward to playing Mid Beds Tigers. We didn’t have Charlotte, Olivia or Jazz today, so no subs, but the girls were soon keen to be warming up against the morning chill.
Kitty made a great start with some skilful play and early passing and ultimately a shot early in the game which found the back of the net taking us to 1-0.
The Tigers though made consistent advances towards our goal which were all kept very admirably at bay by some great defensive teamwork by the two Rubies and Tayla with Izzy and Mollie, who stood in for Olivia and Charlotte in midfield, dropping back when needed.
Improving again on her best game last week, Ruby K made some confident clearances, some good forward passing and perfectly placed throw-ins.
Mollie and Scoobs had their running legs on again and consistently carried the ball towards the Mid Beds’ goal, placing some lovely passes up to Kitty. Both too had the confidence to have a couple of goes at goal themselves.
Izzy battled on in midfield managing to sneak in some lovely runs through the Tigers’ keen defence and at one point almost managing that forward somersault she never quite achieved at gym; no headache thankfully!
Tayla consistently placed some strong passes from the back up to our forwards and from memory, struck two screamers on target, from a long way back, which the Tiger’s goalie safely prevented from crossing the line. Also encouraging her teammates throughout, Tayla; won the parents’ Girl of the Match today, well done.

A far out, high looping shot, by Tigers (a case of déjà vu ?) came in the closing stages of the first half which Freya admirably managed to get her fingers to though not quite having the strength to knock it over the top bar, saw the first half end at 1-1 which reflected a very well contested 30 minutes.

The sun broke through the cloud for the second half and our girls, showing no evidence of tiredness, continued to make energetic forays up the pitch to launch assaults on the Tigers’ goal but the goalie held her ground and competently took it all in her stride. Freya too was ready to make the ball safe on the few occasions it broke through our defence.
Excitement increased as the final whistle drew nearer and we wondered how our girls would fare if it went to extra time and then penalties. Some lovely teamwork by Woburn resulted in a successive number of attacks on goal but the whistle blew at 1-1 which seemed fair.
I think the parents were more nervous about the penalties than the girls and ultimately the Tigers scored the last one needed to secure the win but our girls can hold their heads up high after a terrific performance today. A nail-biting match, thoroughly enjoyed by all.

Another team pic because the match was so engrossing we didn’t get any good photos today ! 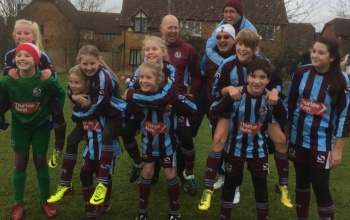