6pm arrival for 630pm kick off

What an excellent game & result (0-1) in our match Saturday against Dunstable who, I feel, are the best team in the league. I went with lower expectations as we had just the 9 players & many carrying knocks too so I certainly had a sense of let’s just enjoy it. Clearly, the girls had other ideas! 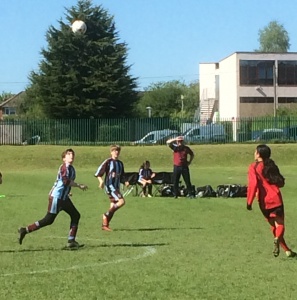 I thought in the 1st half we rode our luck a little bit but we were competing for every ball and the defence were doing just enough to keep Dunstable at bay. 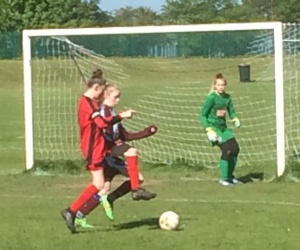 Tayla definitely not letting that ball through

The 1st half finished 0-0. The second half ebbed & flowed but we started to gain the upper hand with large amounts of time in their half  and with the better chances falling to us. With about 5 mins to go Olivia was pushed & we were awarded a free kick 1/3 of the way up the pitch. Kitty struck the ball cleanly & it sailed into the left hand side of the goalie. 0-1. The girls were ecstatic. The coaches & parents were yelling & screaming for the girls to focus, which thankfully they did. Dunstable launched attack after attack, & it was clearly backs against the wall time but  the defence held brilliantly firm for the last period, which I have to say, felt like an eternity.

The final whistle blew the girls embraced and the coaches/parents were able the breath again. 0-1 and our best victory this season.
Bring on City Belles Wednesday. 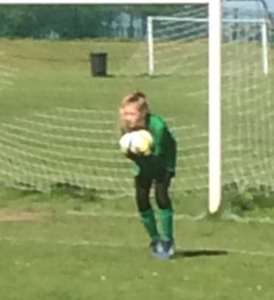 Scoobs chasing down the ball

Dunstable had a large squad to swap in as they had gracefully agreed to lower numbers due to our limited number but I actually think having a small squad today helped, as it enabled the girls to settle into their positions and get their eye in. As sub though Katie had to be flexible and was asked to play right back, left back & forward and she helped the team out greatly by doing so. The ref ( I think partly for his benefit) giving the girls regular drinks break also helped with recovery times. The explanations he gave throughout the match re. his decisions were appreciated though I did have to smile a little when he took it upon himself to demonstrate a high kick. 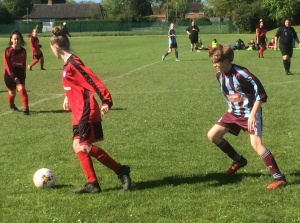 I feel it would be unfair to award just one Girl of Match as the whole team really stepped up to the plate. Thanks girls it was both nerve wracking and delightful to watch. 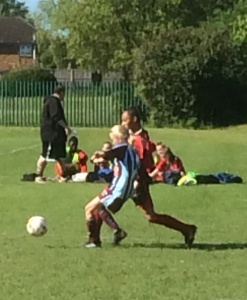 Izzy with her eye on the ball