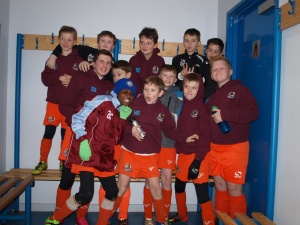 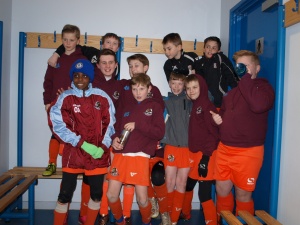 Even more mental preparation & getting in the mode. 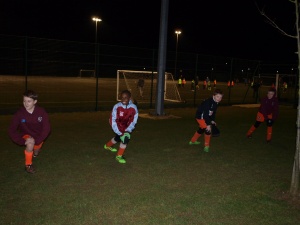 Like a fine tuned F1 car, the lads began to overheat & needed to get started. 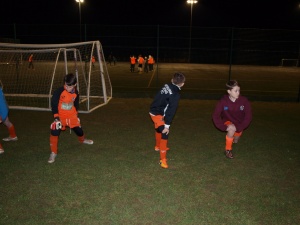 Prevention of injuries is key as we head into the business end of the season ! 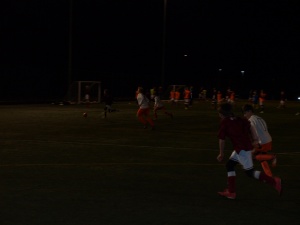 Sub-standard lighting prevents our photographer capturing too much ! 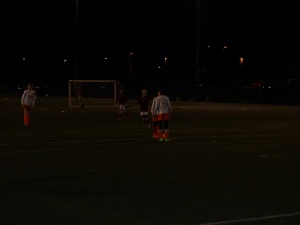 It’s dark, but they’re really out there!

It was a frozen night of firsts for the Hurricanes. First midweek away match, first match under lights, first match on a synthetic surface, first ‘use’ of a dressing room etc.  To say the boys made themselves at home is probably an understatement. The usual Wednesday night hypo-mode was certainly very much with us, as we waited to get things under way.

A very even match that saw both keepers tested, but as the match wore on the Hurricanes grew stronger and more dominant. Helped by a perfect surface, the boys strung some excellent passing movements together and were frequently denied by a fast keeper and very wide penalty areas.  With virtually a full squad making the trip, rotation was frequent but the team responded excellently to a variety of formations and positions.  It was certainly a night to be proud of, as we demonstrated that our desire and solidity was a match for the undoubted technical abilities the Northampton team possess. I’m sure the boys have gained a superb insight into how to build effective moves, time runs and get shots away.

A big thank you to John Brown for setting the fixture up, and also to all the parents who traveled up the motorway and braved the cold.  Definitely one for the album.

The Hurricanes returned to Cup football, but not quite as we anticipated. A request from the opposition to drop to 8-a-side was then followed by a further drop to 7-a-side as we arrived at Tattenhoe. Without the Pumas having the required number of players, we reluctantly agreed to play the 7-a-side format on a 9-a-side pitch.  The first half saw a very controlled and competent display from the boys. Very much in command in every way, the only surprise was that we were not further ahead.  With traffic ‘so one-way’,  the Manager decided to ring the changes after the break in order to give equal play time to our much larger squad.  Unfortunately, inexperience at the back, a thirst for goals from everyone, and a spirited comeback from our opponents meant they drew level. Even so, we had plenty of opportunities to settle it, and but for some excellent work by the Puma’s keeper, that would have been the case.

Sadly, we did not bury those chances, and a dramatic penalty shoot out ensued. Thankfully the boys hit the back of the net with all five penalties, whilst Tattenhoe missed one.

So we’re through to the quarter finals next weekend. Plenty of lessons to be learnt, especially for the Manager !

Well done all, and thanks for the excellent support.

On a crisp and bright morning, the boys were every bit the equal of a Willen team a league above. But for some preventable mistakes, the first half was well balanced with both sides testing each other. The second period was pretty much one way traffic as the Hurricanes pinned Willen down in their own half. A far more complete performance than last week’s league match at Harrold, the boys just failed to net any chances that were created in the second half.  All in all a good, strong performance ahead of the start of cup competition next week. Well done all.

HEADS WE WIN, NO HEADS WE LOOSE !

On a very cold and wet Bedfordshire morning, the boys travelled to Harrold in search of a good performance to sign off the 2015/16 League season. Certainly we played some good passing football, had most of the possession and created more chances. So that should have given us the platform for a good result. Effort and hard work was also evident, however poor finishing and a reluctance to head the ball (either in defence or attack) handed this match to our opponents who were far more clinical with their finishing. We need to be far more assertive when challenging for headers. By leaving the ball to bounce, we hand the initiative to our opponents and make life far harder than it need be.

Fortunately these are things we can now work on as we return to midweek grass training. All in all, the team played well and there were plenty of plus points. Cameron’s finishing was top drawer, whilst there was good creativity and passing in spurts. The spirit was good, as the team battled to the end but could not make our dominance pay. Well done all.

For the second week in a row, Leighton Corinthians were entertained at Wavendon Rec.  The previous week the Whirlwinds had a tight match, and things were very similar for the Hurricanes.  The first half was very much the better of the two for us. Our passing was good, movement generally positive, and we looked to be in charge of the match.  The second half proved to be more of a battle. Our play generally became more rushed, and we failed to exert the same level of control we had done.  All credit to the boys, they rolled their sleeves up and battled hard, however the game was certainly not as creative or skillful as the previous match played at Potterspury.

Particular areas we need to improve on are releasing the ball more quickly, working hard off the ball and heading.  Put together, all of these aspects made for a much harder job than it should have been.  Well done everyone again for working so hard.

Fingers crossed for a good performance.