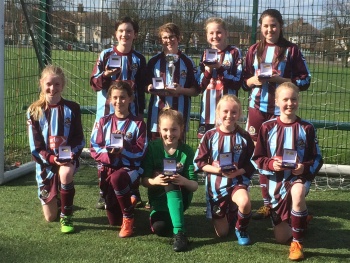 What a, in the words of Lou Reed, ‘perfect day’.

Our first game at the Bedfordshire Festival of Football drew us 9 v 9 against Flitwick (again…). It started in a similar vein to the previous outings ie. backs against the wall with the occasional foray into their half but, we clung on. The girls were cruelly disallowed a goal in the dying seconds, with the ball crossing into Flitwick’s goal just as the whistle blew. Perhaps though that had pushed some Karma our way for later in the tournament. Final score 0-0.

The next game saw us playing 8 v 8 against Mid Beds Tigers & after a suggestion from Gary, Dean rejigged the team a little. This time Woburn, I thought, dominated the game but it was still nail-biting stuff and could have gone either way; the game finishing again at 0-0.

The girls were clearly gaining momentum & were up for what could have been our final game against Leighton FC. Dean, continuing to mull things over, rejigged the team once more. We played well with a few near misses on goal and another pretty even, toughly fought match. It was still 0-0 when the whistle blew taking us (having conceded no goals) into the final against, you guessed it, Flitwick.

The momentum from the previous game continued to grow and with it, the girls’ confidence; we were proving a good opponent for Flitwick. However, as a result of a handball, Flitwick were awarded a penalty in the latter part of the second half. There was an intake of breath…

Admirably, Flitwick have a policy of not accepting a penalty & of passing the ball back to the goalie, which is what they did – an example of extraordinarily good sportsmanship – (a policy which I feel we should adopt). It was another edge-of-your-seat game and it ended 0-0. That meant ten minutes of extra time and a much-needed water break.

Woburn started to believe they had a chance and the girls had the bit between their teeth. As the clocked ticked Izzy (I think) passed to Olivia who fired the ball just beyond the goalie’s reach and into the right corner; 1-0. The girls were clearly ecstatic & we were screaming at them to try & remain focused. They did so brilliantly – closing the game out 1-0.  The Clarets had won the cup !

As a team, the girls showed great determination today, on all fronts. We definitely gained in confidence as the tournament progressed and it was lovely to see all the girls really wanting to battle on as far as they could. I shouldn’t single anyone out because it was very much a brilliant team effort but….well done Olivia on giving us all an excuse to exhale and, although the parents failed today by not awarding a girl of the match (I blame my other half), my award would go to Katie who persistently harried the opposition and fearlessly battled for the ball at every opportunity.