Cup Round 2 – away to Westoning

A late venue change saw us host this cup tie, as Westoning’s pitch was waterlogged. It was a wild and windy day !

Whirlwinds kicked off with the wind and rain blowing in their faces. They coped with the conditions well to start off with and caught Westoning cold, with Billy threading a through ball to Ajiri, who sped away from the defence and smashed the ball in to the top right hand corner 0-1. Whirlwinds were well on top and spurned a number of chances to increase the lead. Westoning with the howling wind literally in their sails, finally got going and started to forage forward, the wind and rain were getting heavier and heavier, Whirlwinds were now really struggling to cope, defensive clearances were blowing back and Westoning were using the conditions well to their advantage. A series of well delivered corners heaped on the pressure, the swirling wind making defending extremely difficult. Finally the pressure told when one of the corners was smartly volleyed home 1-1. It was a bitter blow, and brought even more pressure, which led to panic, just a minute later, a defensive mix up, gifted the grateful attacker the ball and an open goal, the blunder was punished 2-1. Westoning smelt blood and could see the difficulty the ‘away’ side were having with the conditions and pressed forward, Whirlwinds responded well and started to stand up to the series of long balls. Eventually the rain and wind eased a little, and with a little coaxing from the sidelines, the panic faded and they started to play the ball on the floor and get control of the game back. Finishing the half strongly and spurning two fine opportunities to equalise.

Sodden bodies, and ego’s bruised they trudged in for a half time team talk. A simple message, the conditions were now in our favour, and in the second half we needed to apply pressure, we don’t like to play ‘long balls’ however sometimes you have to play the conditions.

Second half kicked off, with the wind still strong, but nowhere near what it was in the first half, the rain lightened but still came down. Whirlwinds pushed Westoning back and spent the majority of the time in their own half, the pitch was getting heavy, and the ball was sticking, making attacking play difficult. Eventually they found a way with Ajiri finding some space in the centre and firing home from just outside the box low to the keepers right 2-2. They now pushed on and created chance after chance, several one on one’s with the keeper, saw the latter come out on top every time, the heavy conditions definitely playing a part. Westoning were penned in and Nathan was a bystander, their occasional counter easily mopped up by the defence. Whirlwinds had enough chances to come out clear winners, but just couldn’t find the killer 3rd goal, and so the final whistle went and on to penalties.

Usually lot’s of hands go up to take a penalty, strangely a lot stayed down this time ! The line up was decided, and off we went, penalties is a lottery, and although we got all of our penalties on target, one unluckily crashing off the bar, Westoning came through 3-2.

Summary: It was a difficult day to play football, the conditions certainly didn’t suit our passing style and I think we definitely had the worst of the weather in the first half. We battled back really well, after a nervy 10 minutes led to us conceding 2 goals. We have spoken in the last few weeks about finishing, although we are scoring lots of goals, our finishing hasn’t been great, and we paid the price today, we had enough chances towards end of the first half and in the second half to win comfortably. However we showed great character for the majority of the game, just wasn’t our year !

M.O.T.M: Special mention to all those who stepped up to take penalties, we score them as a team and miss them as a team. It was difficult to play football today, so defenders stood out Nathan, Thomas & Jack C, came under a lot of pressure in the first half and pulled themselves together well after conceding two quick goals. However on the day he scored hos 100th goal for the team, there can be only one winner : Ajiri 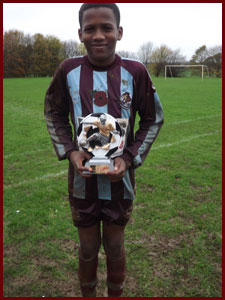