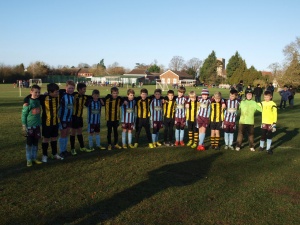 An overnight frost cast doubts over the match taking place, however with bright sunshine and much warming up on the centre area, we got under way and were treated to a real Christmas cracker from the Hurricanes.  Both teams paid tribute to the ‘Football Remembers’ weekend, but after that the Hurricanes were in no mood to take prisoners ! There was a real hunger about the boys, as they stung the Hornets with wave after wave of crisp, fast moving attacks. The passing was excellent, as was the movement off the ball. Strong and commanding at the back and with the midfield  continually spreading the ball wide to the flanks, space opened up in the centre allowing some clinical finishing. It’s a shame this report cannot go into details, however the important thing is that the team really worked hard for each other as a unit, and it paid dividends. Pass/move/pass/move….. it’s simple but it works.

Next week it’s the Xmas 5-a-sides, and then a break.  Well done everyone…. you’ve worked hard on the areas that needed it and turned a mid-season blip into an excellent run.