It was a sunny autumn day.  The Woburn contingent seemed to emerge from the bushes from all four corners of the Addison Park playing field this morning to convene for our next league match against Kempston. Neither side had any subs today but we agreed to play 9v9. Unfortunately, Kempston’s goalie arrived a little late, so we played 8v8 initially. We did alternate between 8v8 & 9v9 a few times as the opposition players had to go off periodically, but the flexibility seemed appropriate and didn’t hinder either team.

The first ¼ was quite even with neither team making any serious attempt on goal but the deadlock was broken when Izzy went on 2 brilliant jinking runs to score twice. This seemed to settle the team and more of the girls ‘came to the party’ after that. We continued to dominate for the remainder of the half.

Kempston had a brief reprise at the beginning of the 2nd half but failed to capitalise on it. Our girls again soon took control of the game. The score line started to elevate with goals also from Olivia, 2 well-deserved goals from Kitty who continued to threaten after a few well-timed saves from the very capable Kempston goalie. The latter should be commended for admirably holding her ground against a bit of a barrage. While it was clear some of the girls saw their chance to score today and took it, there was also some lovely passing play (for details of assists etc, see below). For my money the most aesthetically pleasing goal was a combo involving Jas who buried it after connecting with a beautiful cross from Scoobs. 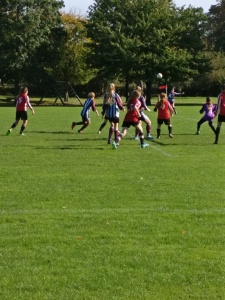 Dean tried Scoobs in midfield today which gave the team a slightly different dynamic. Her speed, tackling and more recently, assists/shots on goal, make us a more dangerous team I feel. 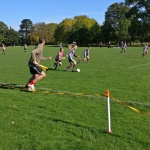 Scoobs with a seagull on her head

We welcomed back Ruby K today and it has been obvious to me that we have missed her strong, accurate passes out form the back, together with those spot-on throw-ins.

Mollie was great over on the wing. She didn’t put a foot wrong; winning tackles, outrunning people, distributing the ball and being there for the back pass. Great effort. (If she gets the urge, I think Mollie could go on a few more runs down the wing, taking on the opposition. I know this may expose us a little down that wing but we have a couple of great defenders in back-up and, let’s face it, Dean could do with a little more stress…) 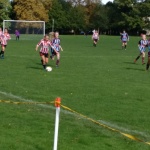 No one escapes Mollie!

Tayla, who is probably our most consistent player, marshalled the back line superbly, reliably seeing off any threats and almost getting a long range shot on goal.  Maggie wasn’t challenged too much today but she sprinted off her line to make some effective clearances, held her concentration, ensuring she was ready to intercept whenever required and delivered some great goal kicks up the pitch, setting up play for an attack.

Both Jas and Kitty too made some great turns and showed a real determination to claim the ball today; well done. I am aware you are both putting in some extra fitness training to help with stamina; we can already see signs of that on the pitch! Again I thought the girls handled 2 x 30mins with no subs really well and this is a testament to their continually improving fitness levels. 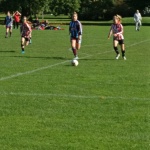 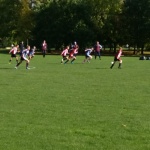 Kitty on the attack

Also of note, the Lionesses were much better with the offside trap today thanks, I think, to Dean and Mike’s pre-match exercise.

Olivia is clearly in the lead with outrageous goal celebrations & please may they continue !

It was a unanimous choice today for ‘Girl of the Match’. For her zig-zagging runs, determined tackling, and ultimately her two goals which changed the run of the game, it’s Izzy. (Proud dad moment). 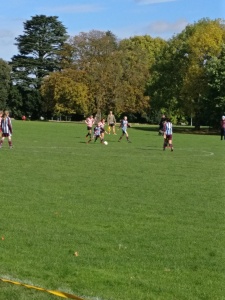