The coldest Saturday yet this season saw us arrive at a windy Hillgrounds, Kempston. Our girls braved the biting chill to don their poppies and both teams huddled together in a circle, heads bowed, to observe a minute’s silence.
The opening whistle blew and within seconds Kitty ran onto a lovely pass from Izzy to coolly slide the ball into the net taking us to a very quick 1-0. Izzy & Olivia, tight together, took on the opposition, clearing the ball to Kitty again who immediately seized the opportunity for a second goal. The game had started well for Woburn. 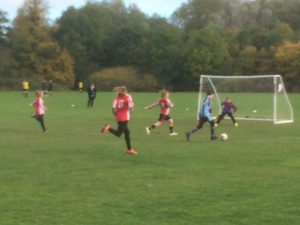 Kitty on the attack

Pretty soon after though, Kempston took advantage of an opening on the left-hand side, scoring their first. This exposed a slight weakness in our defence which they were able to exploit again in the first half, leveling the match at 2-2 by the time we reached half-time. 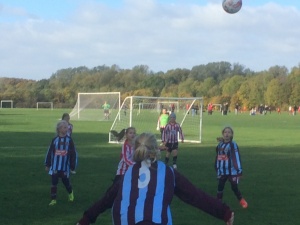 Ruby takes the throw in; get ready Charlotte 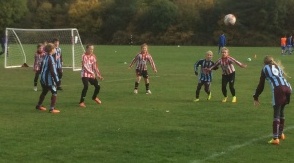 The second half saw Kempston more on top with our girls struggling against the wind and in the third quarter they managed to slip another two goals past our defence, from the left.Scoobs though played an assured game and could be relied upon to get the ball going in the right direction again. Tayla too succeeded in shepherding (no pun intended) Kempston’s main threat out to the wing and went on to strike a cannon-ball shot on goal which was somehow kept out by the Kempston goalie. Charlotte had a strong presence in midfield very much holding her own and now gaining an appetite for running at the opposition. Olivia and Izzy too had a good game and were called on to cover a lot of ground.

Izzy on the attack

After a good save in the first half, Freya took a knock in the second and had to come come off, so Kitty put on the gloves. Some athletic runs up the wing from Mollie today really stood out so it ultimately came as no surprise that the parents voted her Girl of the Match. Mollie’s pass to Jasmine enabled her to thankfully pull one back and Jasmine scored her first goal for the team. Well-deserved Jasmine after so many on target this season ! This renewed our girls’ confidence in the closing stages and they battled well with the hope of netting another but it was not to be.
Woburn scored enough goals today to ordinarily win a game but Kempston, who have had a tough season so far, earned their second win.