This soggy, but thankfully warmer, Saturday morning saw us away against Leighton. Mike suggested an emphasis was placed on good passing today and that was what the parents decided to look out for when considering their ‘Girl of the Match’. The match started a little slow for Woburn although we had the advantage of playing downhill, with the Leighton team in possession from the off. Our girls though soon found their feet.

Woburn’s defence started out much more confidently this week with a fine back line of Tayla, Mollie and Ruby K, ahead of Kitty who admirably took control of the goal in Freya’s absence. 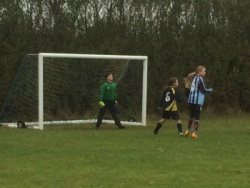 No you….no after you…no you

Olivia and Izzy started to win the ball consistently in midfield, with Olivia providing some lovely placed passes to Jasmine who although always anticipating the ball well, didn’t quite manage to find the net today though not through lack of trying.

Jazz on the move

Any attacks from Leighton were met by great defensive decision-making – if time permitted they passed it effectively back up the field, or made the ball safe. Kitty too confidently stepped in when needed to scoop the ball safely up, ready to redistribute it.

Izzy continued to battle tirelessly and was rewarded with a goal after skilfully negotiating a number of Leighton players and slotting the ball to the side of the goalie. 1-0.

Catch me if you can…

Very soon after, a lovely long pass from Mollie on the left saw the ball land beautifully for Olivia who placed it dead on target and took us then to a 2-0 lead. Olivia showed great determination today at one point sliding into the side line just to keep the ball in play. 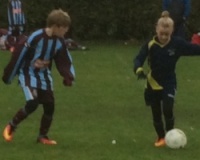 Ruby K put on the keeper’s gloves for the second half with Leighton now playing down the slope. Although play went mostly in Woburn’s favour this half, Ruby got her hands to a difficult high ball and kept the opposition from scoring on a couple of occasions. This, after taking a couple of strong knocks in the first half too; well done Ruby.

Ruby H and Mollie consistently won the ball with some brave defending and skilful play, athletically taking the ball up the wings. Tayla dominated central defence and continued to assuredly either pass or fire the ball back into the opposition’s half. 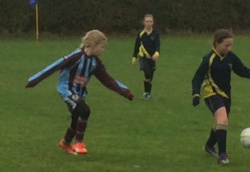 Charlotte keeps her eye on the ball

Charlotte adapted very well to her role up front this week and maintained pressure on the Leighton defenders and put in a strong performance (you have bragging rights against your fellow schoolmates Charlotte !). Kitty assumed her usual role in the second half and reminded us why she’s a striker with a great goal followed by another belting shot which the opposition’s goalie took fully on the arm. 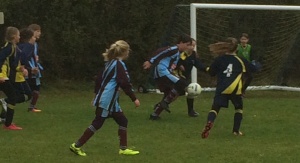 Kitty in the thick of it.

On the whole, our girls’ performance as a team was superb with some great passing, skilful (and at times crunching) tackling, and ultimately well-deserved goals. In all areas, defensively, midfield and in attack the Clarets really took a step up today. In view of this, the parents were unable to make a decision on any one player, and the title of ‘Girl of the Match’ quite deservedly went to the team as a whole.

(You can’t get away with that next week parents !!)