It was a mild, overcast morning at WGS as the parents appeared, bleary-eyed after being forced from their beds perhaps just that little bit earlier than normal. The girls however, were rearing to go. The pitch, though dry, was bumpy which was to result in some unpredictable balls today.

The starting line-up comprised Talya, Mollie and Ruby in front of Freya, with Olivia and Izzy in midfield, with Kitty up front. 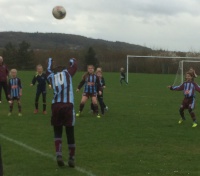 Olivia, captain today, took the score to 1-0 four minutes into the first half after an assist by Kitty, rolling the ball calmly past the goalie into the bottom corner.

Olivia about to strike.

Possession seemed largely in the home team’s favour with Izzy breaking through the Leighton team several times in the first 15 minutes and Woburn benefitting from a number of corners.

Charlotte (opposing some of her school mates today) was definitely up for it, combining nicely with Izzy & coming close to getting a goal after several attempts; it will come soon Charlotte! Her persistent efforts were rightly rewarded by the parents with Charlotte being elected today’s Girl of the Match.

Mollie looking for the pass.

Leighton came out refreshed in the second half, in spite of only having one sub and no permanent goalie, and were clearly keen to equalize.

Clarets’ defence, in its various configurations, largely performed well, as indicated by my dodgy stats below. 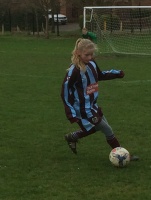 Mollie looked comfortable winning many battles for the ball and Ruby put in some well-placed passes, increasing in her confidence to get to the ball first. There was an audible intake of breath in the closing stages when Leighton’s determination to score put our defence under pressure but Tayla managed to make a last-minute interception to make the ball safe. 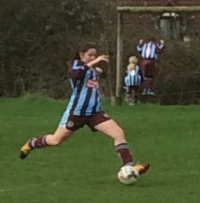 Talya on the run.

Kitty and Olivia both covered stints at the back today too and it was a credit to the defence that Freya had little to do again but made a crucial save when required to keep the score line in Woburn’s favour.

Izzy worked her socks off today, continuing to break through the Leighton team on many occasions and combining well with other players wherever possible, particularly Charlotte. 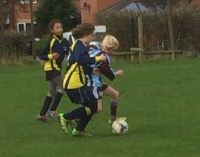 A well-directed corner from Kitty three minutes into the second half landed at Izzy’s feet but a high bounce saw her hoofing it over the bar. Katie came on in midfield in the second half with great enthusiasm, working hard and almost scoring with a high shot.

Jaz although only present for a short time today, after taking in the sights of Leighton Buzzard, made her mark by scoring late in the second half, following an assist by Kitty. Jaz is continuing to impress up front, interconnecting well with her team mates and getting some strong, accurate, shots off. 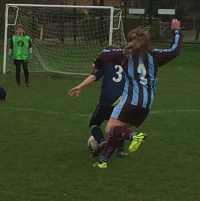 Just a note for the girls, late tackles are typically unintentional and will occasionally happen but when they do, it is important that apologies are made and a handshake offered (which I am pleased to say is normally the case).

Leighton showed great determination but it was another win for Woburn; well done girls. (We should hear about play-offs after next weekend’s games).

The Annual General Meeting of Woburn & Wavendon FC will be held in person on Monday 27th September 2021 at 7pm and take place at Wavendon Community Centre, Walton Road,

Woburn & Wavendon Football Club are delighted to announce that Pikesleys (Woburn Sands) Limited will be the official main sponsor for both the Lions and Lionesses Tournaments in June. The