It was a slightly later start today at Ridgmont and though milder than it has been of late, the wind still reminded us that it was January.

We were without Maggie in goal today but we were pleased to see her arrive to watch, sporting a pair of crutches. Hang on in there Maggie, it won’t be long before you’re back in the game. Both the Rubies were also below par having fallen foul of the winter bugs this week so well done girls for digging deep and both putting in good performances. 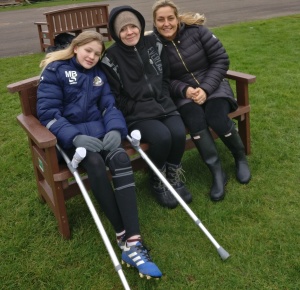 Also grateful to Shefford for playing as their team too had been affected by the bugs and they were without a number of their usual squad.

Woburn started the stronger and within the first few minutes we opened our account with a lovely pass by Izzy, from the right, to Jas who buried it, 1-0.  In that instance we thought perhaps it might have been off-side but the linesman kept his flag down. This was closely followed by a sublime one touch pass from Jas to Charlotte which resulted in a corner for Woburn.

Kitty had put on the goalie gloves for the first 15 minutes but she wasn’t really put to the test and  when she came out onto the pitch for the second quarter, she soon made her mark. Izzy supplied the assist which Kitty converted, taking Woburn to 2. Jas had assumed the role of goalie but for much of the remainder of the first half was not really put under pressure.

Play remained largely in the Shefford half with Tayla, Mollie, Ruby and Scoobs in control of any balls that strayed over the half way line. A blinding corner from the left by Kitty, curled majestically into the goal mouth bringing the score line to 3-0 at half time.

Oranges consumed, the teams returned to the pitch and Shefford appeared to have found their mojo in the early stages with a little more pressure on the Woburn goal, girled now by Tayla (who absolutely loved it !). The Woburn manager (me), battling with an orange carton against the wind, made a brief foray onto the pitch amid a barrage of helpful comments from the touchline. The carton lost. 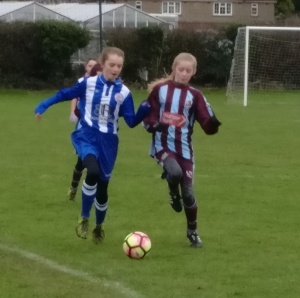 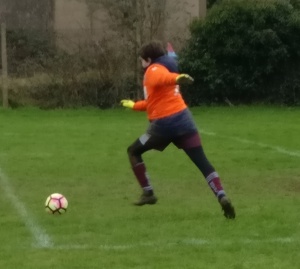 I think that is Kitty under all that clothing 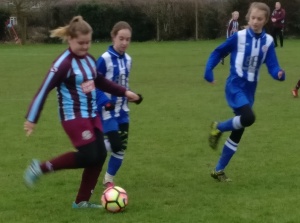 Jas lining one up

Kitty, now playing central defence, collected the ball part way into the Shefford half and lobbed it high towards the goal. Everything appeared to go into slow motion as the ball came in over the head of the Shefford goalie and flew gently into the back of the net; unstoppable for pretty much any goalie…even a tall one. 4-0.

Ruby K assumed the goalie gloves for the last quarter and got her hands to the ball when required and Kitty moved back into her usual role up front. A strike from Kitty rebounded and was followed up by Jas who scored her second. The final goal came from another intercept by Izzy who passed it to guess who, Kitty, giving her her fourth. The game ended 6-0 to Woburn. 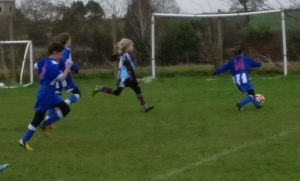 Following her stints in goal, central defence, attack and hat-trick plus one, today’s GOM has to go to Kitty for the second week in a row. Well done !

Due to the state of our pitch, the girls are prone to more than a few air kicks and today was no exception. Winner of the most aesthetically pleasing air kick this week, once again, goes to Kitty.