Following a couple of weeks’ Easter break, the Clarets were drawn against Flitwick …. again, this weekend. Flitwick are always a pleasure to play but I am sure, like us, they would have welcomed a little variety in terms of opposition.

The weather couldn’t quite make up its mind with a few welcome rays warming us all sufficiently to tempt off our outer layers only to have us whipping them back on again within seconds.

The Lionesses started quicker out of the blocks than Flitwick, dominating play for the first 20 minutes which the stats bore out with us having many more shots on goal and corners. Kitty hit a spectacular shot which disappointingly belted off the bar and there was some particularity lovely interplay between Izzy & Olivia feeding some great passes on to both Kitty and later, Jaz. 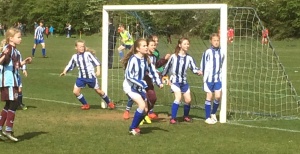 Getting ready for the corner.

Flitwick however soon got their eye in and started to play the football we all know they can play which was rewarded with a goal after a mix up at our back (we need to work on ‘putting a name on that’). The first half finished 1-0.

While the girls were having their half-time oranges, I noticed a flicker of a smile across the faces of some of our supporters at the brief appearance of a lycra-clad gent on the pitch during the half-time break. Play soon resumed and Flitwick started the quicker in the second half.

We were very much on the back foot, with Freya admirably thwarting a number of strikes on goal though it wasn’t long before the relentless assault resulted in another goal for the Eagles. We did play ourselves back into the game in the latter part of the second half somewhat but the final whistle blew at 2-0. A deserved win for Flitwick – well done.

Olivia on the attack. A penny for your thoughts Gary….

Ruby K had a good game today, gaining in confidence all the time and putting in a particularly aggressive interception at one point which immediately turned our defence into attack. Combined with some well positioned passing and even out-manoeuvring one of Flitwick’s best players on one occasion, it was a good performance Ruby, keep it up. Mollie too pressed well and rose to the challenge of out-running some flying attacks down the wing. Kitty played strongly at the back for a while with some great distribution up the pitch and some shots on target when back in her usual position and, riding high on her winning goal against Flitwick a couple of weeks ago, Olivia almost scored again.

Izzy was captain today and filled the role well, continually attacking, distributing the ball and running to help at the back when they were under pressure (…she’s earned her extra 5 mins on the ipad).

Parents struggled a little with determining Girl of the Match today but it was rightly awarded to Freya who was under pressure throughout and prevented the score line against us from being much higher.

It wasn’t to be today for Woburn but the girls fought a good battle and can hold their heads high; perhaps less so Charlotte’s dad who appeared to take a strike on the back of the head from a belting ball running wide on the pitch behind. Hard hat next time !