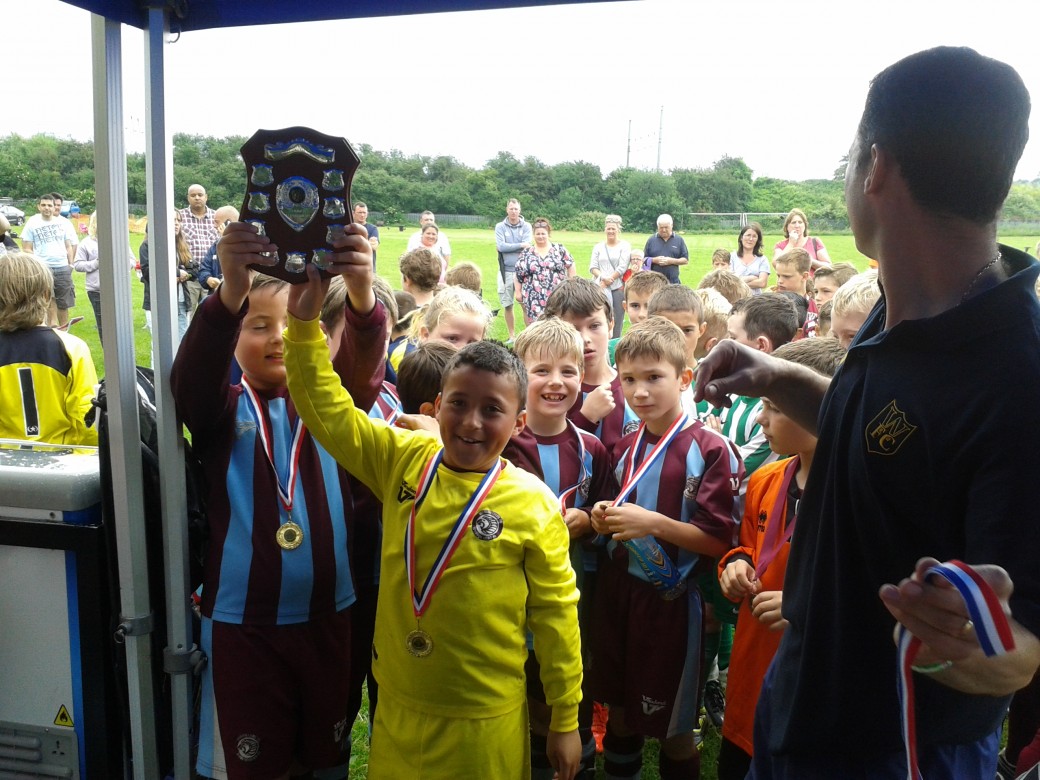 U9 Whirlwinds Lift The Westoning Shield!

Wall-to-wall sunshine in the preceding week gave rise to hopes that the usual Westoning tournament soaking would not show it’s face and despite the huge thunder storm the night before the teams arrived to warm weather and sunshine. This was a tournament that had a reputation for rain and two years previously here we had been soaked through to the skin!

The Whirlwinds were placed in the top division for this league-based tournament so we knew we were in for some tough games. We came out of the blocks faster than Usain Bolt and it wasn’t long before Max had taken first blood against Derwent Yellow in a strike that set the tone for his accomplished performances all day. Seconds later Alfie finished off a great team move to strike the Whirlwinds’ 100th goal of the season.

As the tournament progressed it became apparent that Firs were going to be strong opposition and so it proved. We were equal to it though and it was just desserts when Dan pivoted onto his “weaker” left foot to create space before cracking the ball into the top corner from outside the area. We were looking good until the last minute when a rare foray into the Whirlwinds area led to us conceding a rather dubious penalty that the opposition felt should not have been given and despite Ollie’s best efforts in goal the tie finished all-square. Both Ollie and Tariq were winning many plaudits for their solid goalkeeping and this gave reassurance to the rest of the team. The draw was also a bitter pill for Amelia who had been faultless in defence – a commanding physical and technical presence.

Whipping boys Silsoe proved stiff opposition in a rear guard action that saw them lead a charmed life. Despite our best efforts we just could not find that break through with Jake coming closest and working tirelessly throughout the tournament to continuously turn defence into attack from his midfield birth. This was two points dropped and left us vulnerable now in a tournament we would have been in pole position to win had we not slipped up.

Hosts Westoning were now favourites to put their name on the trophy as they led the table going into the last round of games. The only team that could stop them now were the Whirlwinds as we prepared to face them in a winner takes all clash. Knowing that only a win would be good enough to secure us the trophy seemed to galvanise the team and there was no doubting the fact that the players were greeting the tie with relish. This was effectively the final and gave us a chance to avenge the recent loss we suffered in the final of the Cranfield Cup.

……suddenly, right on queue the heavens opened. Torrential rain hammered down to ensure the Westoning tournament would not be a totally dry affair after all. …..and there they stood, the Whirlwinds, waiting for their opposition to come out. It was as if the rain wasn’t there, the players were totally focussed on the task in hand. If Westoning were going to win it they were not only going to have to cope with torrential rain but a force 10 Whirlwind too!

The first third of the game was proving a tight affair with both teams making progress without really threatening. The Whirlwinds kept to the plan and played with real urgency knowing we had to score. As a talented Westoning’s attack broke down deep in to our half Jacob picked up the ball and carried it up the field in a run reminiscent of Robben against Spain. He slickly beat three players before turning on the after burners and heading up the line. His cross was always going to be dangerous and as it broke Alfie’s predatorial instincts were on hand as he won the ball, set himself and smashed it into the back of the net!

The Whirlwinds were far from done though and if anyone thought we were to sit on our lead they were wrong. Shortly after another break ensued, this time from the left where Josh had been tearing teams apart all day. A sweet right foot from another player showing the confidence to shoot with their “weaker” foot now put us firmly in command. 2-0!

A strong and spirited Westoning were not going to take this lying down though and they continued to push rifling a shot in which Tariq was more than equal too. The ball broke again and they smashed it into the corner of the net from an acute angle with an unstoppable strike. 2-1. Now their tails were up as they rallied with cries of “we only need one more”.

Woburn did not fall deep though and kept pushing with Izzy making some important runs and making a nuisance of herself upfront. Another Westoning attack was thwarted and as our four-man midfield streamed forward Dan spotted the ‘keeper a few yards off his line, carried the ball just over the half-way line and powered a thunderbolt that went flying over the ‘keeper and into the roof of the net to spark wild celebrations. 3-1 and this time there was no coming back!

The Whirlwinds had done it in conclusive fashion with everyone playing their part. We were solid in all departments, all games had been keenly contested in the right spirit by all teams and the players all had huge smiles on their faces.

Well done to Westoning for putting on such a great morning’s football and well done Whirlwinds, your team spirit, passion and enjoyment for the game shone through!